I talk about the change curve a lot in individual coaching and in group workshops but recently I’ve found it really helped me focus and get back on track and I thought I’d tell you how. 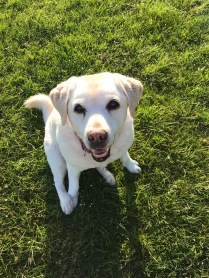 Back in the summer we had to have our beloved dog, Meg, put to sleep.  She’d had a long and busy life and at 13 and a half, her legs gave up and we had to say goodbye.  It was the single hardest decision I have ever had to make in my life.

As well as missing her like crazy the other thing that I noticed was the change in routine, particularly for me.  I’m a morning person and so generally was the one who was up and out at the crack of dawn to take her out for a walk.  I’d then make sure I wasn’t out too long to be back to walk her at lunch or make sure someone was here to let her out and then I’d be back home as close to 5pm as possible for her dinner and finishing off with a walk later in the evening.  It was a routine I was glad to do as she was a fully paid member of the family.  So, now that she wasn’t there, I suddenly found myself with a couple of hours a day back & more freedom around timings, which you might think was a bonus, but I found myself wondering what to do with myself and flitting from task to task with no focus.

Recognising I needed to do something to help the healing process I looked to the Change Curve.

The change curve is a model of change based on the 5 stages of grieving process identified in the 60s by Psychologist Elisabeth Kubler-Ross. 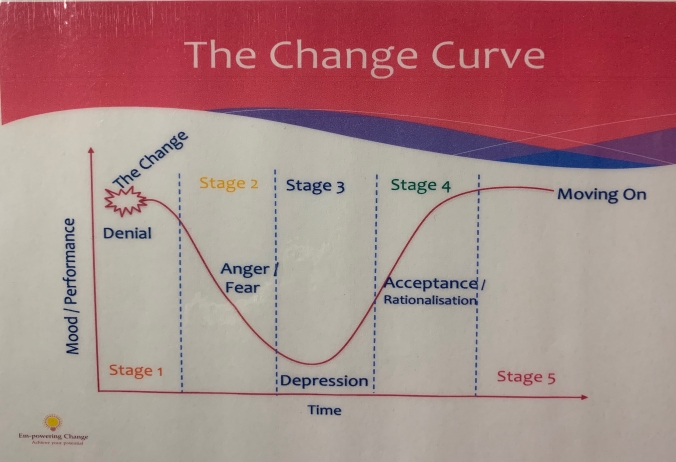 She found that there are 5 stages we tend to go through when faced with a change:

During this time our mood and performance are understandably affected.  There is no defined period for progression and sometimes we will get stuck at a stage or even bounce backwards and forwards through them depending on what’s going on for us.

So how can knowing this help us?

How it helped me

How it can help you?

If you think about a recent change you’ve been through, divorce, moving house, job change or even a change of software system at work, you can identify these stages.

It doesn’t have to be such a big change though.  Ever had a plan change at short notice or been expecting something to be a certain way and you’ve been initially thrown when it’s not.  For example, I was making beans on toast for tea one night recently and was imagining how great it was going to taste, beans piled on top of hot toast with sliced cheese melting gently on the top…  Then my husband took over and his preferred method is to make cheesy beans by melting the cheese in with the beans and putting them next to the toast – so, not quite as I was imagining!

It was a quick transition through the curve but serves as an example that even something really quite trivial can cause this response in us.

Even if it’s a change you’ve instigated, it’s likely you will still go through them, although it may be a quicker process!

So, when life throws you a curve ball, which it will do from time to time, take a minute.  Think about where you are on the Change Curve and what do you need to have / do / be / communicate to help you move onwards and forward to acceptance and moving on so you can embrace the new situation you find yourself in.

One final point.  Remember though, the most important thing is to be kind to yourself and go at the speed you need, it’s not a race!